It's an illustrated method for organizing arguments plus some arguments constructed by this method. This guy Ramon Llull came up with them centuries ago as a way to organize his thoughts. A while back, on the internet I saw some interesting diagrams. Letters arranged in rings; this guy wanted a physical aid to combining concepts to make an argument. He made little paper wheels to spin on the same axis—like code wheels. Rotating wheels would bring concepts into physical alignment, suggesting combining those concepts. A neat idea, sure… 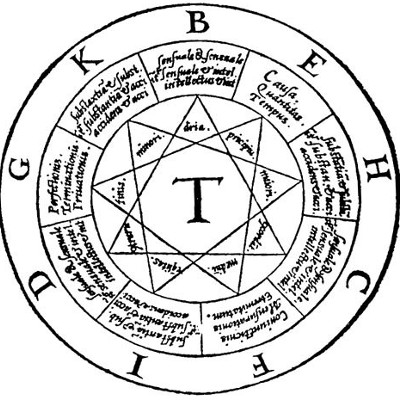 The arguments Llull was making were that his religion was the one true religion. He wanted to write Apologetics which sounds politely sorry but apparently are all about how one's favorite religion is the best religion and about how everyone who believes anything else is going to Hell. If that makes you think: Hmm, I wonder if Llull's diagrams boiled down to unusually-rigorously geometric bulls—— then, yeah, that's pretty much it. I was hoping to raid this collection of works for a metapuzzle idea, but it's pretty much a disaster so never mind. I gave up on reading the arguments he'd made based on his diagrams. They were impressive in their own way: drawings of flower arrangements based upon the combinations of concepts he'd figured out… if only his talent for constructing these concept-maps hadn't been wasted on god-bothering, they might have been interesting. But it's about as well-considered as you'd expect from someone who thought it was a happy coincidence that he'd been born into a community that happened to observe the one true religion.