Who are you impersonating to celebrate Identity Theft Awareness Week?

It's a history of how the East India Company took over the Indian subcontinent. It's such a grim book; maybe it's a book to keep handy in case you meet someone nostalgic for the good ol' days.

How I thought the story would go: Everyone in the region was getting along just fine; then a bunch of jerk English merchants showed up with mercenaries and took over. A corporate dystopia hundreds of of years before cyberpunk; a steampunk corporate dystopia, as it were.

I had it wrong, though.

There were a few empires warring to take over India. The Mughal, the Maratha, the… uhm, the one in Afghanistan, just let me google it, uh, the Darrani empire, I guess? And there was at least one other empire. Sorry, I lost track. Whenever things seemed like they might calm down, some neighbor or other would take advantage of the calm to muster an army and attack the Indian subcontinent. That's an oversimplification, but it's not a huge oversimplfication. I thought this was going to be a story of evil European colonizers making trouble; but along with them were plenty of closer-to-India colonizers.

In the Caribbean, there were pirates and privateers; and there were clever people who used to be pirates/privateers with a high risk tolerance looking for something with a better risk:reward ratio. Surviving privateers and pirates had figured out something about moving trade goods in combat-dangerous situations; they'd created combat-dangerous situations. So they went to England, found some investors, and set up trading outposts in India, never mind that there were empires roaming around. I.e., they formed the East India Company.

Not all of the East India Company founders were pirates; there were politicians, too. And for the politicians that weren't company founders, well… The politicians (and, presumably, the ex-privateers) knew it was good to have a government on your side. So they handed out free stock shares to members of the English government. Later, when war broke out between England and France, those government members said it was vital that the nation send government troops to defend… trading outposts a couple of continents away.

The English troops showed up, fought some French troops (as you might expect) and then stuck around. There weren't necessarily French troops around to beat up on, but they could still defend these trading outposts from these imperial armies going around. So… the East India Company did deals, supporting an empire that would let them trade and give them a break on taxes.

And the Company kept doing deals. They hired mercenaries. And they got involved in these imperial wars. At first, they were always doing so in service to some local imperial ruler. But at some point, they stopped bother with this; and when Company troops beat up some empire's forces, the Company started governing the conquered region.

This period of warring empires was about 100 years. This was a terrible time to live on the Indian subcontinent. Soldiers fought. When the battle was over, the winners proceeded with atrocities: murder, rape, robbery. Even if you were on the winning side and survived, you weren't safe; in any battle, there probably wasn't enough medical supplies for all the wounded. Depending on how things were going for some empire, there weren't necessarily enough supplies, period. Instead of setting up supply lines, maybe soldiers were expected to raid for food as they went.

This was a tough book to read. Every so many pages, someone would win a battle and then I'd realize I was at the start of another catalog of atrocities. So I'd flip ahead a bit. I'm sure I missed some important details; I'm just as glad to miss those details, though.

The imperial armies weren't the only ones causing problems. Any band of bandits could claim to be forces of some army and stop paying taxes, steal supplies, or what have you. Who was going to stop them? The people you might normally hope would stop bandits were probably in some army, marching around somewhere else. Or they'd been killed; so many were killed.

Back in England, citizens were scandalized: A company was waging war; waging war was only for nations. I'm no fan of privatization, but looking back, I feel like focusing on the word "corporate" in the phrase "corporate dystopia" misses the point. Those atrocities were bad when carried out by corporate mercenaries or imperial troops. Anyhow, England, scandalized, eventually took over India from the East India Company; everything that happened afterwards was outside the scope of the book. Thus I got to skip reading about further disasters.

UCSF Med School smartie and COVID-19 pundit Bob Wachter tweets that he's once again willing to dine indoors and unmask in small groups. This is exciting news for people like me who trust Wachter's judgement on such matters. It's also exciting because now I can tweak my COVID dashboard: before, I had just one snapshot of "safe" numbers; I can look at those numbers again for a second "safe" snapshot. E.g. what are COVID-in-wastewater levels like when it's safe to go out?

The last time Wachter felt safe, he said he wanted SF to have at most 40-80 new cases per day. Now he just says 80 new cases. I'd been using 40 as my dashboard's "safe" number. Now I'll double that.

The last time Wachter felt safe, the wastewater measure I use was 4 thingies; now it's 24 thingies, 6x higher. Hmm, I bet this means that recent wastewater data has not yet trickled in from all of SF's collection points. If I look at wastewater data next to other COVID-y measurements, they all seem roughly "in sync", but the wastewater levels spikes upwards in just the last few days, unlike other levels. Like, it's higher now than at this surge's peak back in November. 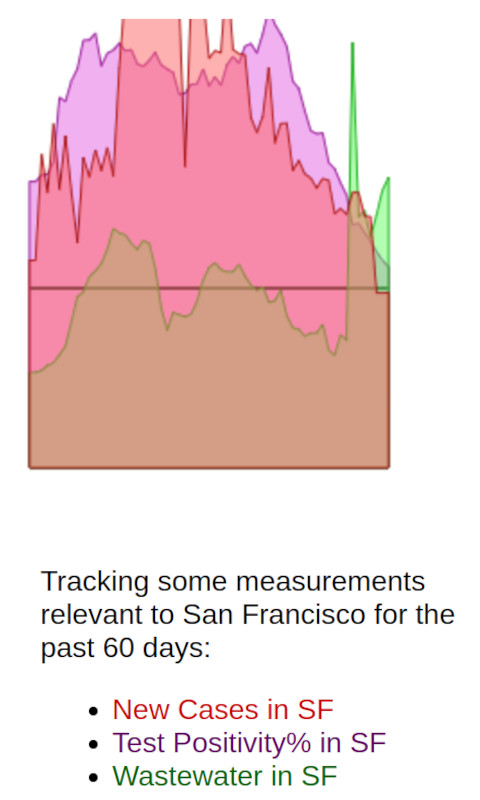 I guess I'll make a calendar appointment in a week to remember to check if more wastewater data has come in for today. Hopefully more data comes in and it puts the wastewater back "in sync" with the other…

Oh, and there was a weird thing in the SF testing data. I was fetching that as a JSON file. Its last testing data was Christmas 2022; but it said the file was keeping up-to-date; like, as of yesterday it said the most recent data in the city was Christmas 2022. If I visited the web page for the data, that web page no longer said JSON was available, just other formats like CSV. So I changed my script to download in a still-working format. But that JSON data was weird; if SF is no longer exporting their data in JSON format, I'd expect it to have old data, but also that the file wouldn't have been updated recently. Anyhow, getting clean data is tricky, yadda yadda. 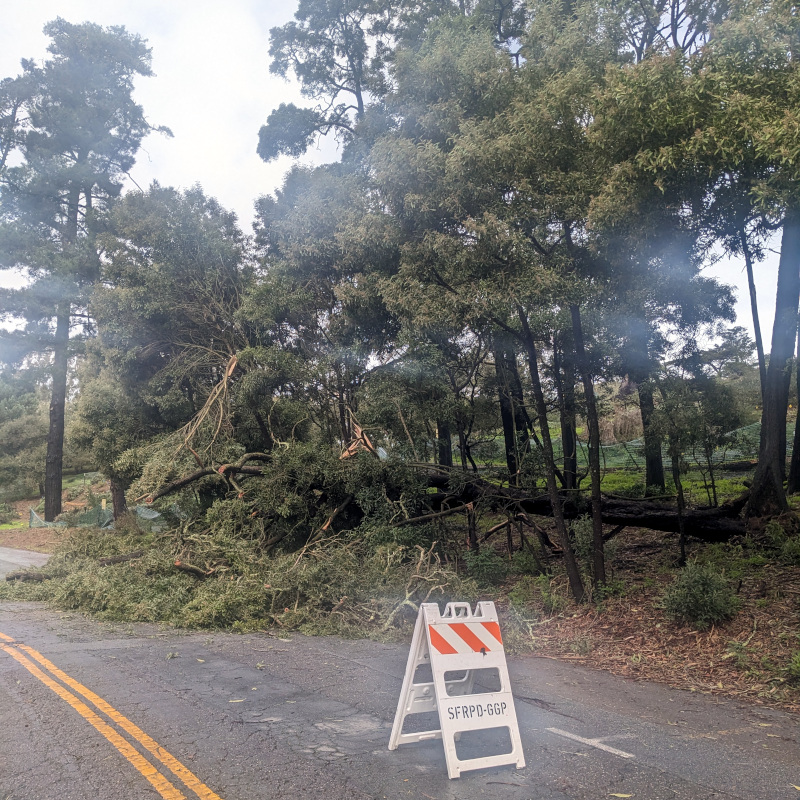 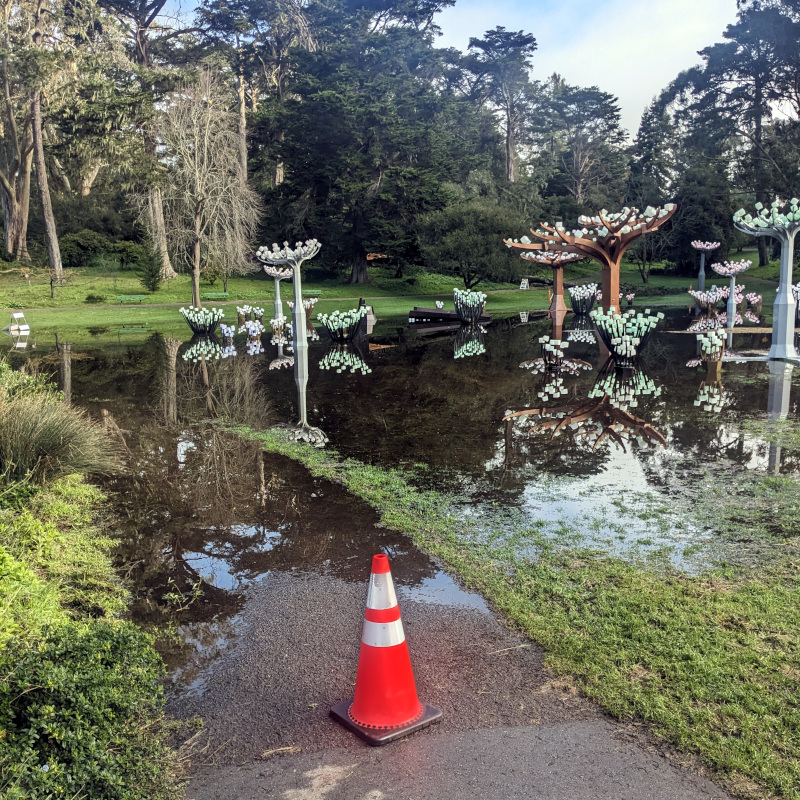 I'm just now realizing that the head of the San Francisco Sheriff's Department Oversight Board is Jayson Wechter, the guy who ran those Chinese New Year parade Treasure Hunts.

Wow, hmm. Wow. OK. That hunt? We picked the guy that ran that hunt? OK. I think I need to go clutch my head in my hands for a while now.

Yesterday I walked out to San Francisco's Ocean Beach. Along the way, I observed the carcinisation of a mailbox at 4625 Lincoln. The beach itself was misty, pleasingly abstract. The Great Highway had reverted to the Great Walkway; I don't think that was scheduled; I think the rains had just washed a lot of sand over the road and nobody wanted to dig things out with more rains predicted that night. 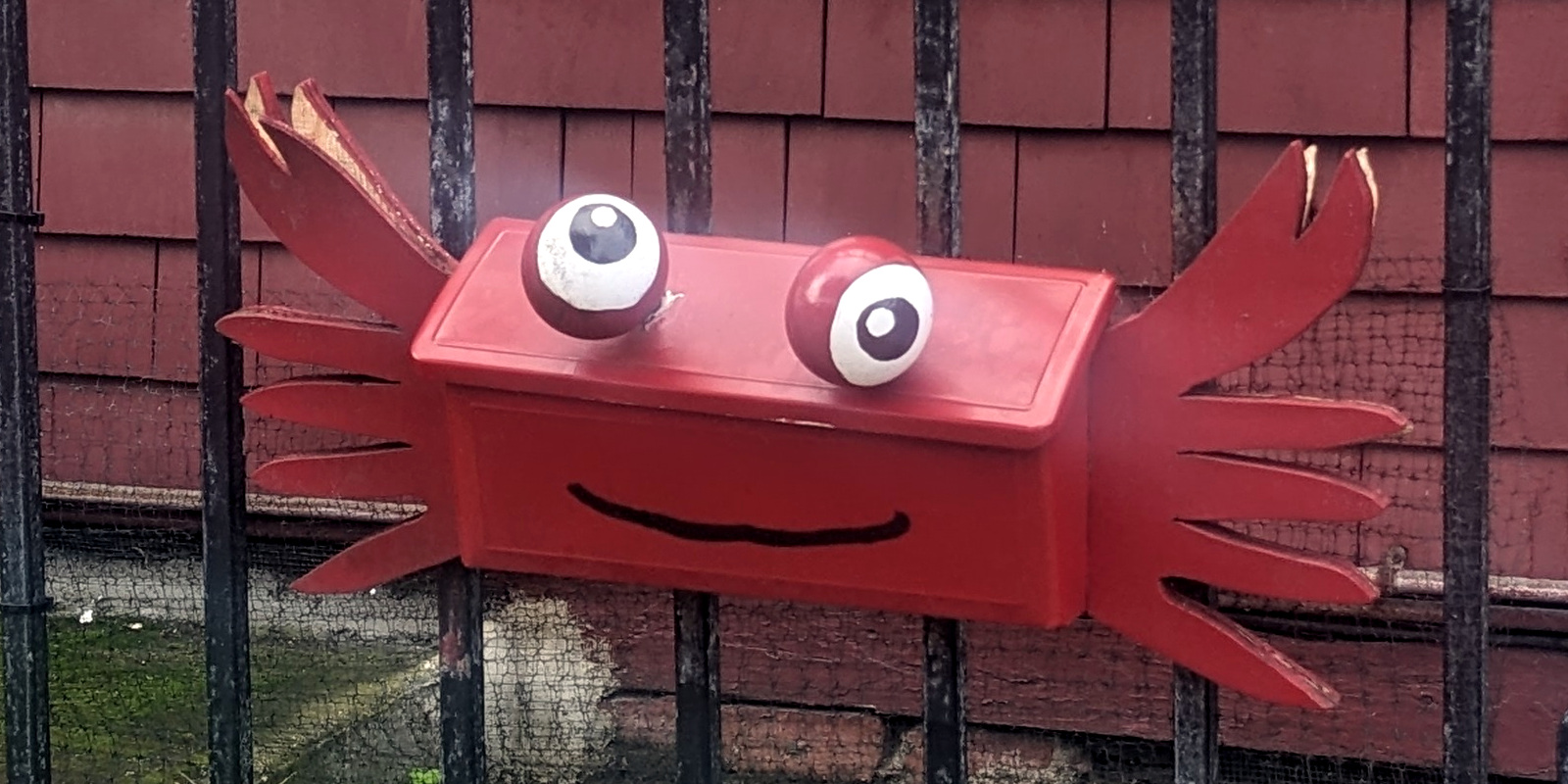 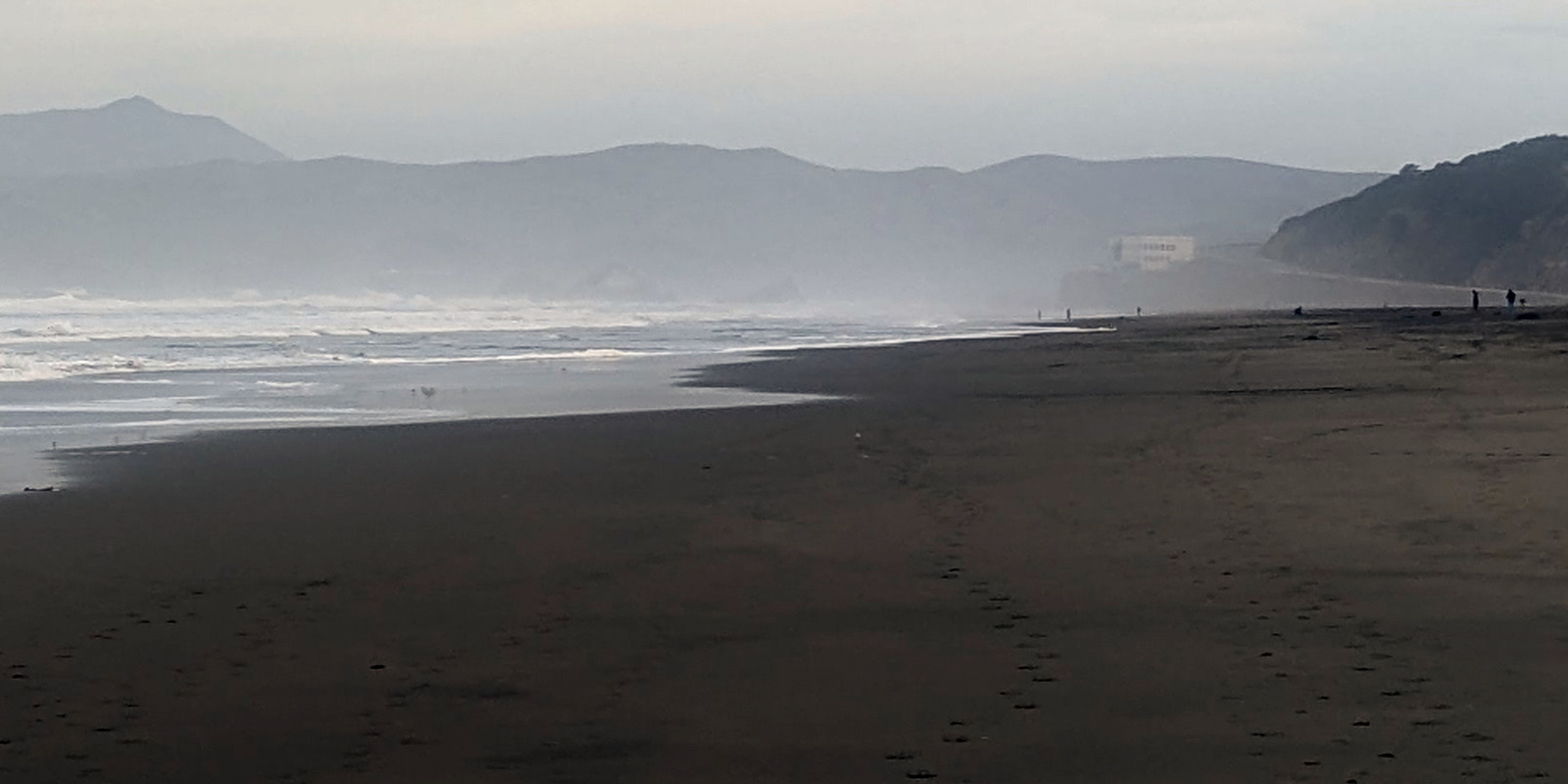 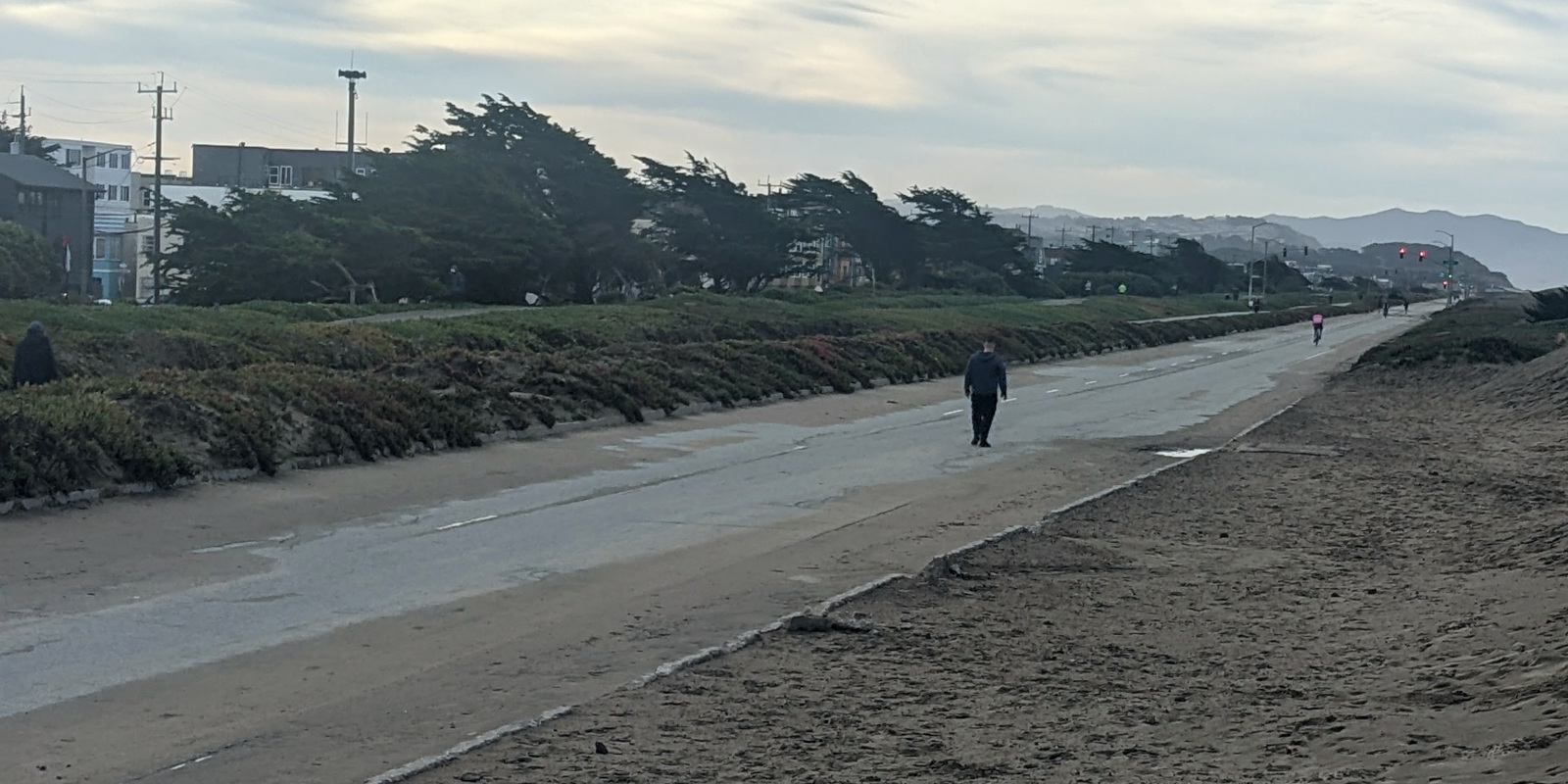 The puzzles.mit.edu https certificate expired two days ago. Is this a puzzle?

There was a break in the storm this morning, so I took a quick exercise walk. There was tree debris, mostly due to the storm, but also a bit I suspect due to a Haight Street drunk. 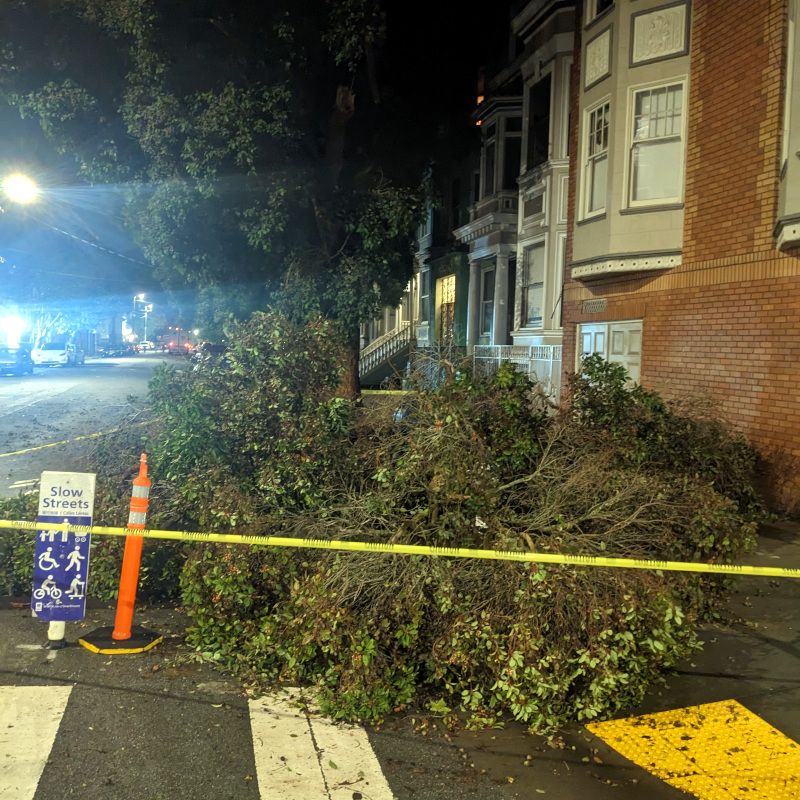 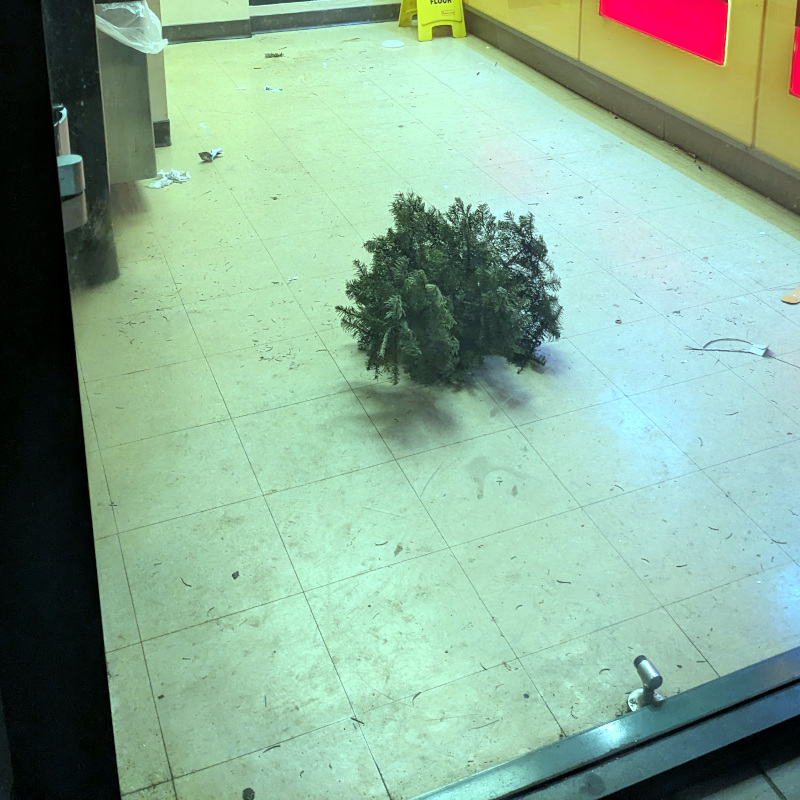 "A #puzzle by its nature is something purposefully constructed, often with painstaking effort so as to have the right difficulty for its intended audience. When I was part of the Mystery Hunt constructing team last year, many of the puzzles took weeks or longer to put together. As opposed to a round of Spaghetti, which I construct by choosing five words at random from a pocket dictionary." 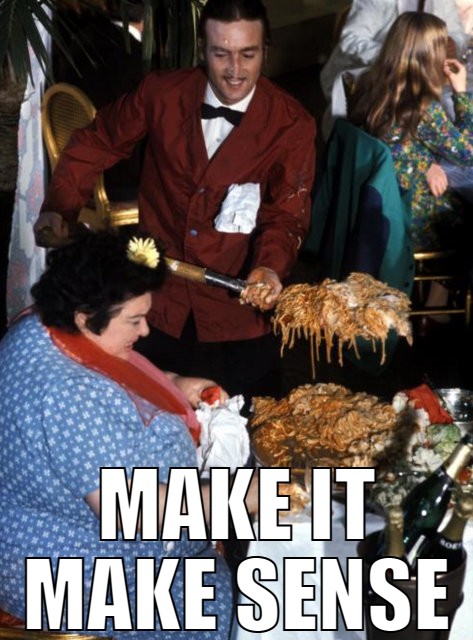 I ordered some soyrizo (soy-based chorizo substitute) last week. This week, the grocery store AI's recommendation engine is of two minds about my food preferences: very meaty or very vegan.